Well the Psycho start is for Oldmort the Old Budgie, it must get boring with only a mirror to peck and a spray of Millet to talk to, and your drugs shut in a tin !
Snowmaggedon this morning, well 2” but undaunted we waxed the sled runners, harnessed  the dogs and struggled into our fur Parkers ! OK Brenda put her boot grips on and we plodded out for the bus to Skipton – it’s Wednesday Narrow Boat day. I left Brenda ice climbing in the high street and went to see what the guest beers were today. First pint was a Leeds brewery New Moon 4.3% Black IPA it was OK lots of body and a good hop taste but Black IPA ??? the pipe was a Butz Choquin maître pipier de-lux fait main (hand made) St Claude France with a brass Army mount stem, smoking Germain’s Special Latakia Flake from the Channel Islands. 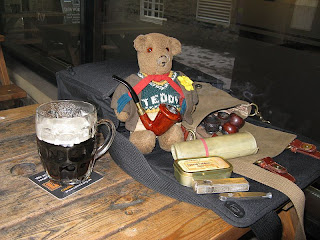 I had a visitor while outside 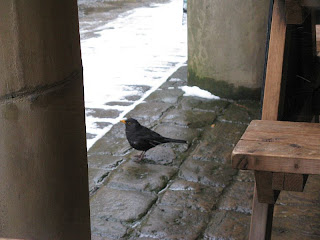 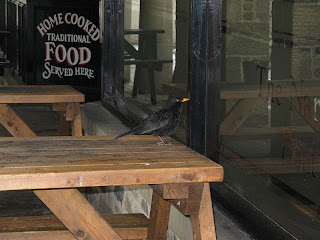 Brenda landed and we went inside to warm up Brenda a Cappuccino and I tried a Batemans brewery Hooker – golden bitter 4.5% with the slogan “have you got the balls for it”
OK taste notes for Mark (I did answer your comment in Bribery blog)  there’s a hint of citrus in the top note with tastes of xmas pudding and fruit mid notes with nuts coming through in the base ! Nuts indeed or should that be Bollocks ? to the Bear it’s all subjective and just tastes like Beer this one not startling but not bad, the New Moon was better because it had more Hops and the Bear likes Hops ! 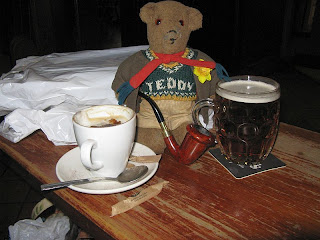 Brenda had warmed up from the ice climbing and had a 1/2 of Timmerman's brewery Lambic (wild yeast ferment) Strawberry Ale 4%.- I had an Ilkley brewery Timothy Hughes Pale Ale 3.5%, hoppy almost an IPA and more to the Bears liking than the Batemans, 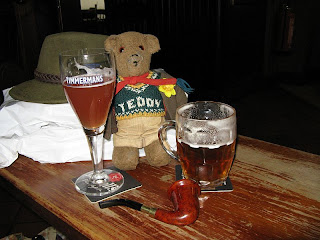 these two were so spot on we both had another, Brenda had said "this is like pleasant pop" after the first taste of the Strawberry but followed that with I can feel the effects of this ! after the second 1/2, but at 4% the Bear said he’d be more inclined to complain if he couldn’t ! 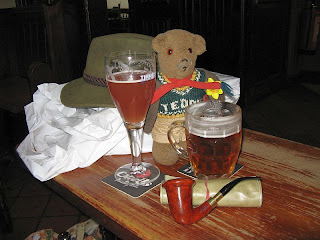 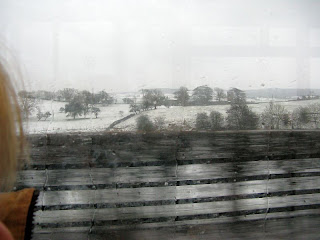 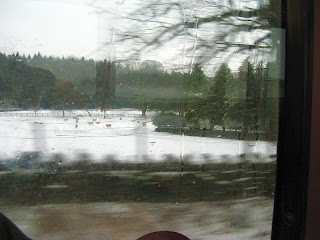